Mayor Bowser Launches the Fifth Annual “Home for the Holidays” Campaign, Calls on Housing Providers to Partner with the District 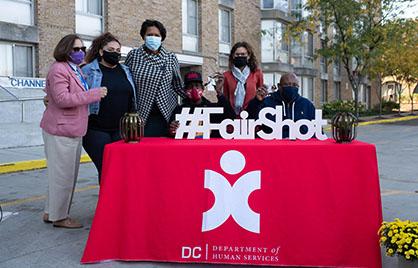 (Washington, DC) – Today, Mayor Muriel Bowser and the Department of Human Services (DHS) launched the District’s fifth annual “Home for the Holidays” campaign, which seeks to transition residents experiencing homelessness into long-term housing during the holiday season. This year, the District’s goal has more than doubled, and DHS will be working with community partners and housing providers to place 1,250 families and individuals into housing during the Home for the Holidays campaign.

“While the goal of this campaign is to move neighbors into permanent housing during the holiday season, the effects are much more long-lasting,” said Mayor Bowser. “Through Home for the Holidays, we have an opportunity to work together as a community to change people’s entire lives. We are incredibly grateful for the housing providers who have already stepped up to work with us. Now, we’re asking every housing provider in the city to look at their inventory and reach out to DHS to learn how they can play a role in providing Washingtonians a home for the holidays.”

“The COVID-19 pandemic has left us with a more profound appreciation for the fact that having a home is essential for health and well-being. We have dedicated additional resources which will mean over 2,500 residents who have been experiencing chronic homelessness can attain a safe and stable home of their own,” said DHS Director Laura Green Zeilinger. “We are thrilled that this year’s budget presents a historic opportunity to dramatically reduce the homelessness crisis in our community. We are eager to expand partnerships with existing and new housing providers to realize the transformational effect of housing for our neighbors and community.”

Home for the Holidays first launched in 2017, and more than 1,500 total households have moved into permanent housing as a result of the campaign. Community members can support Home for the Holidays by donating new and gently used houseware to households. Residents who have items to donate should email [email protected] for more details. Through this campaign, the District is seeking to partner with local housing providers to identify approximately 2,500 new apartment units in the next three months. This year, there are unprecedented resources and many residents are already matched to services and housing subsidies but are still in need of an affordable, available unit.

Since launching Homeward DC, the Bowser Administration has driven down overall homelessness by 38% and family homelessness by 73%. In that time period, the District increased investments in permanent housing by 60%. According to the 2021 DC Point-in-Time Count, homelessness in DC has decreased by 20% over the past year. Notably, for the first time in five years, there was a small, but important reduction in single adult homelessness.

The Bowser Administration’s reforms to the homeless services system have prevented a shelter stay for more than 8,000 families. At the center of this work was closing DC General and launching small, service-enriched short-term family housing programs throughout the city, including the Kennedy in Ward 4, the Horizon in Ward 7, the Triumph in Ward 8, the Sterling in Ward 5, the Aya in Ward 6, the Brooks in Ward 3, and the Terrell in Ward 1.

In July, Mayor Bowser launched Homeward DC 2.0, the District’s updated strategic plan. Homeward DC 2.0 includes a plan to build on the District’s progress in driving down family homelessness, with a strong focus on realizing similar progress with unaccompanied adult homelessness. Last fall, construction started on a new 801 East Shelter for men, which will be followed by the renovation and re-construction of the Harriet Tubman Women’s shelter in Hill East.